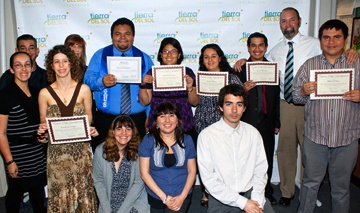 Tierra del Sol hosted their NEXUS Graduation and Certificate Ceremony on March 8, 2012 where they celebrated with over 100 people the accomplishments of their Education and Employment participants of the last year. Certificates were awarded to those who completed the Community Navigation, Self-Advocacy & Support Systems Development and Career Path Development education tracks. Awards were also given to those who received perfect attendance in the last quarter.

A highlight of the evening was the celebration of the NEXUS Spring Graduations that included Jonathan E., Nikolay Mosiyenko, Victor Rodriguez and Victor Hollowell.

Jonathan attended West Valley Occupational Center, earning various Certificates including Word 2007. He then transitioned into the Practicum Phase of Nexus where he interned for the Van Nuys Courthouse. While at the Courthouse, Jonathan mastered several skills in the Conciliation, Civil, and Probate Departments. Jonathan, our first Nexus Graduate, is now working full time at Alternative Home Care as an Office Assistant.

Nikolay took English reading and writing classes at LA Valley College to improve communication skills. He completed a work-study at LAVC Maintenance and Operations, then transferred full-time. Nikolay is now a Stockroom Associate at Ross Dress for Less. 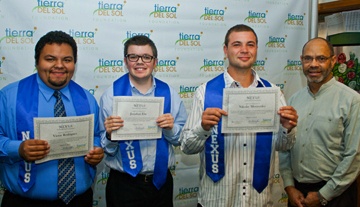 Guests were inspired with a welcome by Tierra del Sol Executive Director Steve Miller who shared the excitement of the evening and congratulated the NEXUS graduates for their hard work and motivated them to continue learning and working hard in their volunteer, internship and paid employment positions.

Another highlight was the words of encouragement by the Executive Director of the North Los Angeles County Regional Center, George Stevens, who said that Tierra's effectiveness is not only felt at the Regional Center, but also in his own life as well. When his children were small they attended a private school in Granada Hills where they were receiving extracurricular art instruction. To George's surprise and pleasure, that instruction was being delivered by Clare Zeitlin, a client artist from the Sunland Studio of Tierra del Sol Foundation. He spoke of how she was there giving of herself to help his sons. It was a touching story for all to hear.